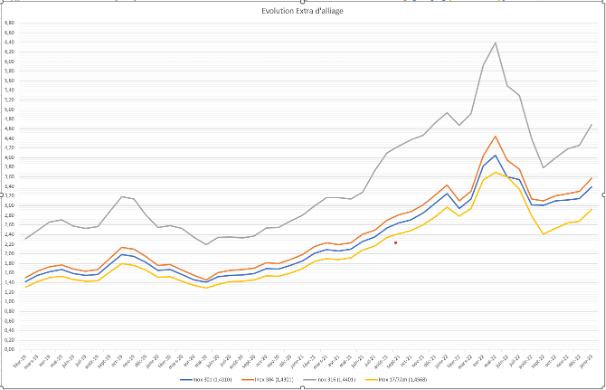 As Filame does on a regular basis, it questioned its panel of suppliers, mainly of steel and stainless steel, to get their forecasts for the next few months for the evolution of the price of these materials.

If the peak had been reached in April 2022, we witnessed a stabilisation and a fall during the third quarter of 2022 in the prices of steel and stainless steel and in particular of the alloy surcharge. However, from September onwards, there was a reversal of the trend and the end of 2022 confirms this reversal of the trend with a fairly significant rise.

This is due to several factors.

First of all, the global market and particularly Asia is booming.  China, which is the world’s largest steel producer with a market share of around 50%, has changed its strategy in several respects.  After a policy of restricting the real estate market to reduce its debt, which led to a sharp drop in housing sales and thus in steel production for this sector, China announced a series of stimulus measures for this sector.

In addition, China has eased its zero covid measures, which is leading to an improvement in demand in the Chinese market.

These two elements, among others linked to a certain recovery of consumption in this market, lead to an increase in the price of raw materials in this market.

In addition, Europe has decided to introduce a carbon tax for non-European companies, which will probably lead to an increase in steel import prices.  At the same time, there is a further reduction in production capacity in Europe.  Several central European mills have closed down blast furnaces, while producers with electric steel mills are shutting them down and restarting them, following the development of demand very closely.  In addition to maintaining prices by reducing supply, this has led to longer delivery times.

This decrease in supply is confronted with an increased demand for steel from the automotive market, which is expected to grow in 2023, particularly as a result of a reduction in supply problems for components such as conductive sills.  The effect is therefore that of an upward price trend.

This evolution will of course have to be correlated with the evolution of the economic situation in general and in particular with the effects that inflation may have on consumption and therefore investments.

The Filame Group is a European leader for the manufacturing of springs and wire forms, and cutting, stamping and sheet metal works. Our main customers are global leaders in their sectors. We deliver across Europe within 24 hours.